[Above picture] Mount Kinabalu porters taking a break after completing the 6km trek from Timpohon gate – the starting point of the climb – to the Panalaban base camp. – Pix by NSTP/Khairull Azry Bidin

NOTE: From April 1-2, I climbed Mount Kinabalu and had the chance to talk to some of the most inspiring individuals, the mountain porters. Here’s what I learned.

STANDING at only 160cm and weighing 52kg, one would be forgiven for doubting Jvy Mius’ ability as a porter, carrying heavy loads up Mount Kinabalu.

However, the sight of his lithe frame springing from one rock to another as he treks his way up to the Panalaban base camp of Malaysia’s highest mountain is a marvel to behold.

Depending on the weight of the load, the 22-year-old Dusun lad from Kampung Waang in the highland district of Ranau can reach the base camp, located 3,272m above sea level, in under two hours.

“That is if I am carrying light objects. If the loads are heavy, then I will reach the camp in three hours. If they’re heavier, my climb will take four to five hours,” he told the New Straits Times.

The speed is remarkable given that climbers, depending on their fitness levels, usually take between four and nine hours to complete the 6km trek from Timpohon Gate — the starting point of the climb — to Panalaban.

Jvy carrying gas cylinder up to the Panalaban base camp. – Photo courtesy of Jvy Mius

Jvy is one of 82 porters, or “tulun mamamabo barang tumakad nuluh”, from the Sabah Mount Kinabalu Porters Association, which was established after the 2015 earthquake.

Porters from the association hail from Kota Marudu, Tuaran, Kota Belud and Ranau.

Jvy said the heaviest load he had carried was 46kg of building material, comprising wooden planks and concrete, for construction work on the mountain.

“I’m used to this (carrying heavy loads uphill). This route (the trail leading to Panalaban) is our playground. We just close our eyes and we are there. No complaints.”

On April 1, Jvy along with 15 porters, helped to carry bags belonging to a group of mountaineers, including journalists, during a two-day climbing expedition led by Sabah Parks to unveil two new hostels in Panalaban.

Prior to the climb, knapsacks were weighed and given to each porter. The weight of each load determines how much a porter would get. For that climb, Jvy made RM260.

Jvy said not many youths showed an interest in becoming porters.

“But the mountain provides us with jobs. I make between RM100 and RM350 a day. Furthermore, scaling the mountain is good for health and I enjoy the outdoors.”

For building materials, he said, the fees varied depending on size, adding that porters would usually ask for RM10 or more to bring 12m -long wooden planks to Panalaban.

A mountain porter carrying a wooden plank to the Panalaban base camp. 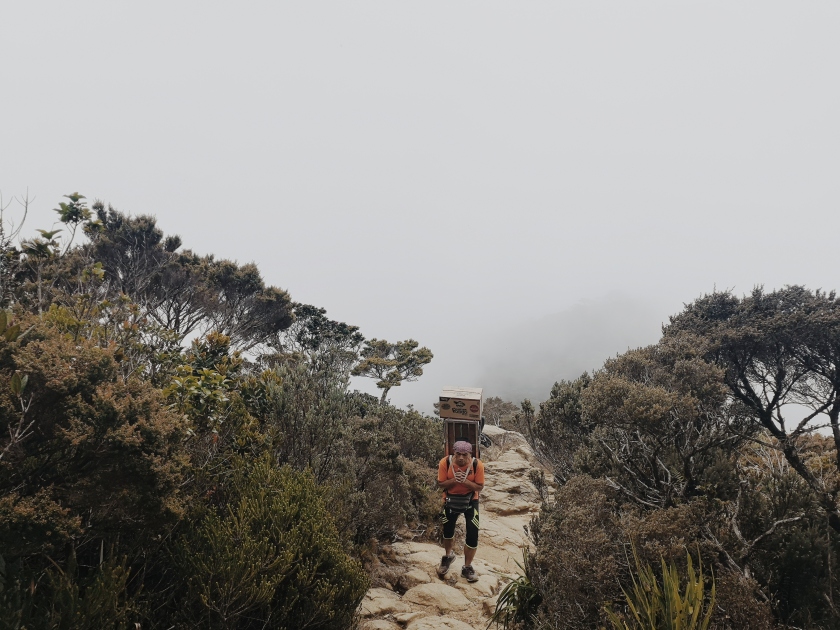 A mountain porter carrying food supply to Laban Rata GUesthouse at the Panalaban base camp.

David, 38, from Kampung Kiau Nuluh in Kota Belud, has 12 years’ experience as porter.

He said most of them took up the job as a career and followed in the footsteps of their fathers.

Like others, Jvy and David started climbing the mountain since primary school, helping their fathers carry loads to Panalaban.

This helped them became used to the trail and become mentally, as well as physically prepared.

“I worked as a storekeeper with a private tourism company for three years.

“However, it was not challenging nor thrilling. So I quit the job to become a porter and have never looked back.

“Being a porter, I have the advantage of using the mountain trail as my training ground because I am also an ultra-runner.

“I will go to the mountain five days a week. During my rest days, I plant pineapples,” said the father of two.

Hi, I am A. Geraldine. I am a full-time working mother of one. I work in the creative tourism industry.

Even though 2022 was a mixed bag for me personally and professionally, I'm thankful to have the chance to create lasting travel memories with my Munchkin.
Mini me #CodySamuel :)
My Son #CodySamuel.
A fun first time #abseiling with @michmaydg !
First pandemic flight, to Kuala Lumpur for work. When not working, I tried my best to find time to do some sightseeing, Christmas shopping and meet friends. Shopping was not really a success, but I finally visited the National Museum. Also managed to catch up with KL media friends yang pernah bertugas di Sabah sekian lama.
My trekking adventure in China before Covid-19 hit. Trekking from Yongsheng Village to the iconic tiger leaping stone. Read my blog on AGERALDINE.com via the link in bio.
In 2018, I explored Kiulu nature. Walked through paddy field, dived the Kiulu river, went water rafting, went jungle trekking, learnt jungle survival skills, etc... Outdoor adventures in my own backyard that I took for granted because I was always focusing on travelling overseas.
Loading Comments...
%d bloggers like this: